Orange Cones, No Phones was launched during the 495 Express Lanes construction and has been carried over to the 95 Express lanes construction corridor. This year, Transurban and its partners worked with Area Chambers of Commerce to take a stand against distracted driving on the I-95. To kick off the initiative, leaders from Area Chambers signed a pledge in May 2014 to raise awareness among their members of the dangers of distracted driving and discourage mobile phone use while driving.

The initiative came after the release of the second annual report1 on distracted drivers on I-95 (as part of the Orange Cones, No Phones campaign). It found that the number of frequent I-95 drivers likely to use their mobile phone while driving increased from 56 per cent in 2013 to 62 per cent in 2014, with more than half of them saying they were at least occasionally responding to a work-related issue. Despite the dangers of distracted driving, just 18 per cent of area drivers say their employer has a policy on the use of mobile phones while driving. 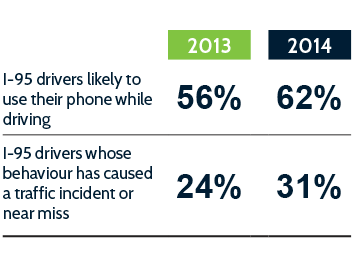 Distracted driving is dangerous, and can lead to accidents on the road. Texting while driving is exceptionally dangerous. Drivers are three times more likely to experience a traffic incident or near miss if they text while driving. The survey found that the number of distracted drivers on I-95 who have had a traffic incident or near-miss as a result of their behavior has increased from 24 per cent in 2013 to 31 per cent in 2014.

Transurban will continue to work with stakeholders in the area to raise awareness and to help ensure the safety of our customers and contractors.

1An online survey of 1,023 frequent I-95 drivers who live in Northern Virginia was executed March 2014. All qualifying respondents drive through the 95 Express Lanes construction zone at least a couple of times per month. Fifty-two per cent of respondents drive this portion of I-95 on a weekly basis, if not daily.